Decibel : What is dB and its importance for audio professionals : Blog - Magroove for Artists

Decibel : What is dB and its importance for audio professionals

If you have ever discussed any audio theory, this certainly was involved – either you acknowledge it or not. Even then, very few people understand effectively it importance. And what not many people know is that a decibel is, in fact, the tenth part of a Bel (that’s why “deci”), a unit of measurement created by Bell Labs, telephony company owned by Graham Bell, to measure loss in transmission lines. But because in audio we measure in smaller scales, the “deci” was adopted for practical reasons. Today we are going to understand its different types and the practical use of it. That way, more than just explaining the subject, you’ll end up with more skills to record and mix with better results. Shall we?

Decibel from A to Z

This is a brief list of things you should keep in mind about decibel:

If you have no idea what’s going on above, stay calm! Let’s move on to a deeper explanation about what those affirmations mean exactly. Beginning accordingly.

Most common types of decibel

The different types, what is used to compare and the unit used to measure that:

Where can we find each type of decibel

We will explain further on what each type of dB really is. But here is a list of where decibels are easy to find:

All those types of decibel are different from each other, because they are representing different units. The only thing they have in common is that they are all comparing values with their respective units of reference.

What’s the unity of each one of the decibels?

A value in decibel is always translatable into a real value in the unit you are comparing it with. Remember we said that each decibel has a point of comparing reference? Here we are going to see what’s that point to each one of the decibels. But first, a very important information: the reference is always the 0 dB point! Meaning that if in that said decibel scale we have 0 dB, we will have exactly the value of reference. That way, we can say that 0 dB is the calibration point, or the starting point of the scale.

In the mixing board, 0dB refers to line level. Meaning that if you enter 1,23V and keep the faders on 0dB, the output will be 1,23V!

Why so many types of decibel?

That is a similar question to “why have we created “Liter” if the already had “Meter”?”

Decibel is only the method of comparison, but we still need to identify the subject and the unit used. It’s as if we said that a person is “ten times more” than other person. But ten times what? Faster, smarter, lazier, taller, skinnier? Without the indication of the decibel type. we cannot know what are we comparing it with.

Why do we use decibel?

If every dB value can be translated into a real value in the unit we are comparing it with, well… why don’t we use the actual value instead?

Great question! And the answer for it comes in two parts:

If we calculate, we’ll see that the differences are around:

We measure two people’s heights in centimeters. Taking one person’s height and subtracting by the other’s, we will have the difference between those two people. Subtracting centimeters linearly when we are talking about people’s height is pretty practical, because height is linear and humans perceive height as linear too. Now, when the matter is sound pressure, using linear subtraction is not practical at all. The example we had above, using Pascal, would be the equivalent to “subtracting one person’s height by the other’s” but in a sound pressure sense. We have seen, however, that it doesn’t seem right at all. And is here that the decibel comes to the rescue. The dB is precisely that: instead of making a linear comparison, we will be doing it logarithmically. Instead of comparing units, we compare the decibel of the units.

Let’s see now how loud the sounds are, in decibels:

A lot better, no? Those representative numbers and their differences make a lot more sense with our perception of the phenomenas, doesn’t it?

Curiosity: That sensorial perception happens because human hearing is also logarithmic, so we perceive logarithmical changes as if they were linear.

dBVU – Decibels on your audio peripherals

VU means “volume units”. If your compressor, equalizer or other peripheral has a pointer scale, to measure output or input, it is possible that that meter is in VU. The VU is more than a pointer meter, it has to follow some basic calibration and “decay” rules (mainly for the pointer to fall). Those rules allow the VU to be a good translation of the intensity of the signal.

The dBVU is the scale used in this kind of pointer display. It normally indicates the beginning of the “red zone” of the pointer.

There is no standard as to the dBVU comparison to a real unit, as in volts. Each manufacturer defines their own “0dB VU” as they desire. Check out what it might mean: 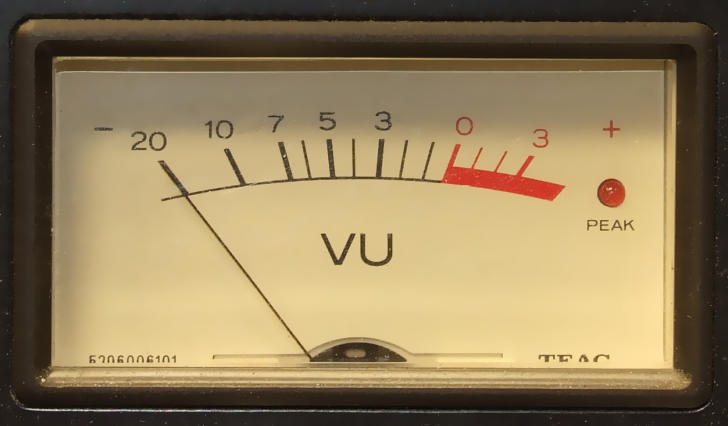 In technical terms, the 0dBVU will normally be one of the following values:

In practice, it is easy. Are you using a peripheral? Adjust the mid signal of input and output to 0VU and let the peaks go a little over the red zone, but never getting to the end of the scale by excess. With this proper gain staging, you should be safe and working within the equipment’s optimal zone.

The decibel inside the DAW. That is the only one going from -∞ (minus infinite) until 0. All the others normally start at 0 and only work with positive values or start at 0 and work around 0, in either positive or negative numbers.

When you reach 0dB on your meter, all your bits are filled and cannot go any higher. As your computer cannot create more bits, anything above 0dB is distortion. This was so aggressive that the DAW’s, after a while, started to “fake” a 0dB that in reality isn’t 0, giving a little breathing space. So even if you reach 0. the DAW can still handle it without distorting it. But don’t count on that or work on that basis, never let reach zero decibel! 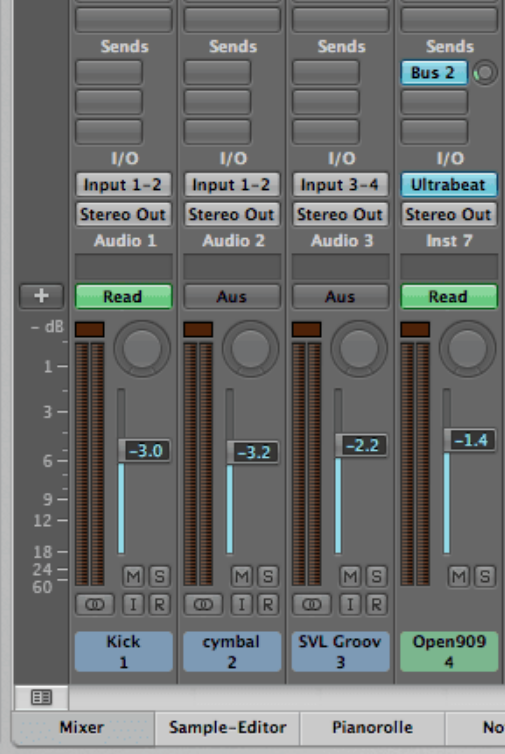 Logic Pro 9 and the scale going to 0dBFS

Pro Tools. Notice how the fader scale is intentionally (and mistakenly) shown with 12dB on top. That is done to induce you to do the right thing while mixing (imitating a mixing console).