Sample rate : Which to use? What is the best?

I just want to know which sample rate to use!

Summing up, to choose a sample rate, you must consider:

What is sample rate?

A sample is a small part of something; in this case, of an audio signal.

Sounds are vibrations that propagate in physical environments, for example, air. As you speak, the vibrations of your vocal chords produce waves that travel through air. These vibrations occur in cycles, and the number of cycles per second is called frequency. In physics, the unit of measurement used for frequency is Hertz (Hz); therefore, the frequency of the sounds is measured in Hertz. The faster the frequency, the higher the pitch. Human audition goes from 20Hz to 20kHz. It means that the lowest sound a human can hear has a 20Hz frequency, whilst the highest has around 20,000Hz (20kHz).

You might have seen the graphic representation of sound as a wave. So, pay attention to the graph below –  it represents, vertically, the intensity or volume of the sound, while horizontally, the propagation of the sound wave into space.

Representation of a sound wave

To represent the sound wave, the computer guides itself by small samples that must contain all the data of the sound reproduction. Imagine a singer with a microphone capturing their voice. The sound of their voice is an acoustic energy and makes the air vibrate. This vibration changes, through the microphone, into electric signal, and a cable transmits it to the audio interface. At the input in the audio interface, there is an AD converter (analog to digital). So it digitalizes the electric signal; that is, codifies it to a binary language of 0 and 1. The same thing happens at the interface output. An AD converter makes the exact opposite, changing the binary code into electric signal, which turns back into sound. 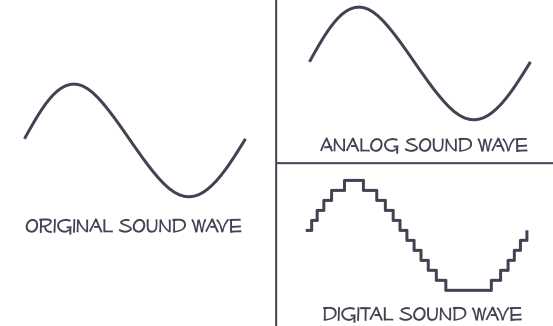 Visual representation of the difference between a digital sound wave and an analog sound wave.

What is the sample rate for?

The sample rate defines how many times a sample of the analog signal will be collected at a period of 1 second. In other words. Do you remember that, in Physics, Hertz is the measurement unit for frequencies? The sample rate also uses Hertz, since it represents how many samples will be collected in one second. Now, think about the sample rate as pictures of the sound: the more pictures you take, the better you can represent the sound in each thousandth of a second.

Then, it means that when we use a sample rate of 44.1 kHz, we collect 44.1000 samples in just one second. It seems to be a lot, doesn’t it? Well, actually, it isn’t. The computer needs to describe, in its binary language, a sound wave that is, in nature, continuous. 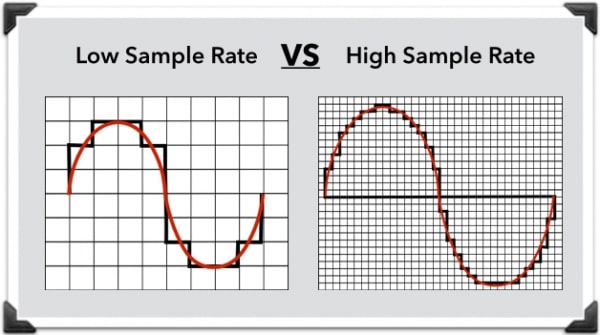 Visual representation of the difference between a digital sound wave and an analog one, both affected by a sample rate.

With that, if no human can hear anything higher than 20 kHz, why bother having a sample rate above 40 kHz? Actually, why is the minimum standard 44.1 kHz instead of 40 kHz?

According to Nyquist’s Theorem, if the sample rates are 44.1 kHz or 48 kHz, the highest frequencies captured in a digital record will be, respectively, 22.05 kHz and 24 kHz. However, besides the definition of a maximum frequency, the chosen sample rate has a collateral effect: all the frequencies beyond the stablished limit are not distinguished or are wrongly understood as lower frequencies. This is called the “Aliasing Effect”, or “Foldover”.

The Aliasing Effect changes the sound and can make a completely different sound out of the rebuilt signal from the samples.

To avoid the distortion caused by these high frequencies, sound cards usually come with an anti-aliasing filter in the signal input, before it’s converted to digital.

However, due to technical reasons, it is impossible to manufacture an anti-aliasing filter with a sudden attack shortly after the human hearing range. Therefore, the cut of the filter ends up making a curve, gradually decreasing the entry of high frequencies. This curve is called slope. In this slope, the filter won’t either reject nor let all the frequencies totally through. Because of that, the slope of the anti-aliasing filter must be beyond the frequency of 20 kHz. Otherwise it will generate losses in the sound heard by humans.

What is Jitter and Dither?

Jitter is clock error (clock distortions) . This “clock” determines the distribution of the sampling process during the time. There may be clock variations and deviations in the reading time pattern, taking the pictures of the sounds with a small delay or advance on the rhythm (sample rate) programmed. This problem is called jitter.

Different reasons can create jitter, such as changes in electrical voltage and noises in the audio signal. Clock errors damage the sound wave reading and can even cause changes in timbre and frequency. Jitter can happen not only at the analog to digital conversion, but also the other way around, from digital to analog.

Dither is a background noise applied whilst exporting the audio. It covers up signal digitalization errors, such as jitter. The noise of the dither sometimes is referred as noise floor, even though it isn’t the correct technical term for it. This noise is friendlier to human hearing than the distortions in analog signal rates, thus we inject it in the recording before finalizing. If properly done, most of the times people won’t even note the dither.

In audio, latency is the period of time between the signal’s entry in the system and the perception of this signal. In other words, it is the delay between when it’s played and when it’s heard. The digital audio introduces latency issues to AD and DA conversions. These problems are directly related to the buffer size. The buffer is a temporary memory where all the sound samples are queued. A captured sound, before being converted into digital, goes through the buffer. It must be big enough to store the samples whilst the processor performs another task.

Reducing the buffer automatically means reducing the latency, but also means increasing processing time. This happens because the buffer constantly needs charging. So if the buffer is too small, the CPU will have problems performing different tasks at the same time, causing interruptions in the sound stream.

Besides decreasing the buffer, another way to lower the latency is to increase the sample rate. It seems to be contradictory, as bigger sample rates need greater processing capacity. But if your system is able to handle it, the latency turns out to reduce.

When you choose to work with high sample rates, your files are heavier. With that, you will need more space in disc to store the project.

If you usually do contributions or jobs through the Internet, you must consider that the heavier the project, the longer it takes to upload and download.

DAWs commonly offer different sample rate options, normally varying between 44.1 kHz and 192 kHz. It is always good to check if your audio interface supports this setting before actually setting up the sample rate on your DAW.

Nowadays, the common interfaces on the market such as M-Audio, Pressonus, Steinberg and Focusrite, usually support from 44.1 kHz to 192 kHz without problems. Don’t forget to read the interface’s manual before buying! It is also interesting to observe the frequency range and the frequency response chart  of your microphone. These parameters point out the sensibility of the microphone per frequency and it’s recording range extension.  So is it worth recording with a sample rate of 192 kHz to capture extremely high frequencies even though your microphone only captures until 20 kHz?

After all, which sample rate should I use?

CDs are in 44.1 kHz and MP3 are usually also 44.1 kHz. In the early 80’s, the companies Philips and Sony established this pattern. But why are the numbers so weird? According to the musical technology specialist Mitch Gallager, in the beginning of digital audio records, the pattern was 48 kHz. However, the manufacturers established a different pattern for the products offered to the public. Thus, it makes everything easier to avoid piracy: mathematically, it is hard to convert a rate of 48 kHz to 44 kHz. Curiosity: In the audiovisual realm, the sample rate of 48 kHz was set as a standard right from the beginning, and there is an interesting reason for that. The frequency of 48 samples por second is a multiple of the 24 frames per second used in movies.

Therefore, if the song is made for a music video, the sample rate must be of 48 kHz or its multiples. Conventional DVDs are always 48 kHz and DVD-A (DVD-Audio, which are different from common DVDs) are 96 kHz (two times 48).  In 2018, the company Tidal started offering CDs with the MQA (Master Quality Authenticated) – it works with a sample rate of 96 kHz.

It is possible that the pattern of 44.1 kHz becomes obsolete soon. After all, at the streaming and processing era, what is the point to maintain the standard of 44.1 kHz?

Here are some possible good explanations:

There isn’t a consensus about the worth of recording beyond conventional rates. Some people say that extremely high frequencies, beyond the limit of human hearing, have effect on what we hear. Others say they are able to “feel” these frequencies. Some claim that the “the higher the sample rate, the better is the quality of the audio” argument is just something sellers say, only to sell.

Get your music on Spotify! 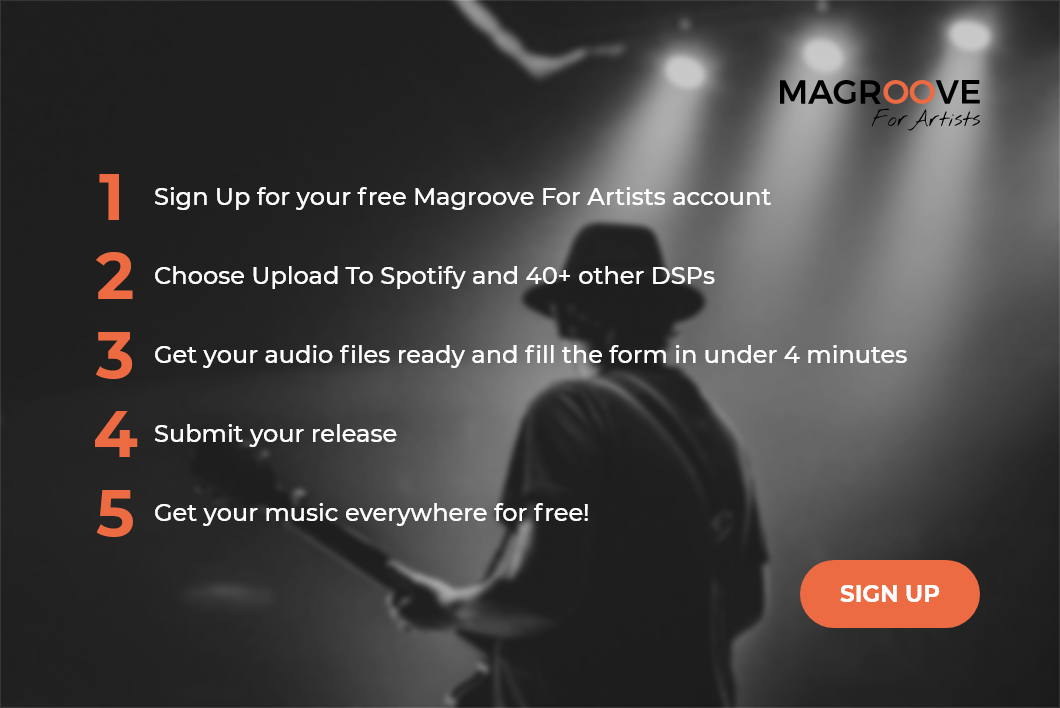