Tube Microphone : All you need to know about them. : Blog - Magroove for Artists

Tube Microphone : All you need to know about them.

Setting up your own home recording studio can be a pretty exciting moment for an independent musician. Time to start planning the layout and arranging everything in the room the way you always dreamt. At some point, you’ll have to start putting down a list of all the equipment you must have for it to be fully operational. But here’s where things get tricky. Everything is so expensive these days that you just can’t afford the risk of choosing poorly your tools. Specially when that said tool is something that will be a key factor during your recordings. I’m talking about microphones. But you ever wondered what is a tube microphone is and what’s the difference from other microphone? So, in today’s post I’ll tell you all you need to know about it, the one that is considered by many the best choice when it comes to mics.

Let’s see below a few other points I’d like to list so that we can start understanding what makes tube microphones “so special”:

On top of that, tube mics are also known for their greater desired distortion and harmonic response. They’re also generally characterized by their warmth and added harmonics.

Some of the best tube microphones that pop out from the top of my mind are:

And the list goes on. I’m sure that there are plenty more great tube microphones out there, maybe some I’m not even aware of, so feel free to share in the comment area if you have any recommendations you believe deserve a spot on the listing above.

By the definition (and roughly speaking), a tube microphone (a.k.a valve microphone) uses old condenser technology (just note that not all condenser mics contain tubes). Those microphones pass on a signal that has such low levels that they need an internal pre-amplification so that the output signal is strong enough to “survive the trip” through the cable. But don’t underestimate tube microphones just yet, back in the day, in the early days of electronics, artists and bands such as Beatles and Rolling Stones didn’t had much of a choice but using tube microphone for their recordings, and let’s be honest, the recordings of these guys are legendary.

Solid state mics are often known as tube mics counterparts. People usually tend to compare both while choosing which microphone should they get for their home studio. So, let’s do just that, let’s see a simple comparison chart below I created with some of the key features of each microphone. 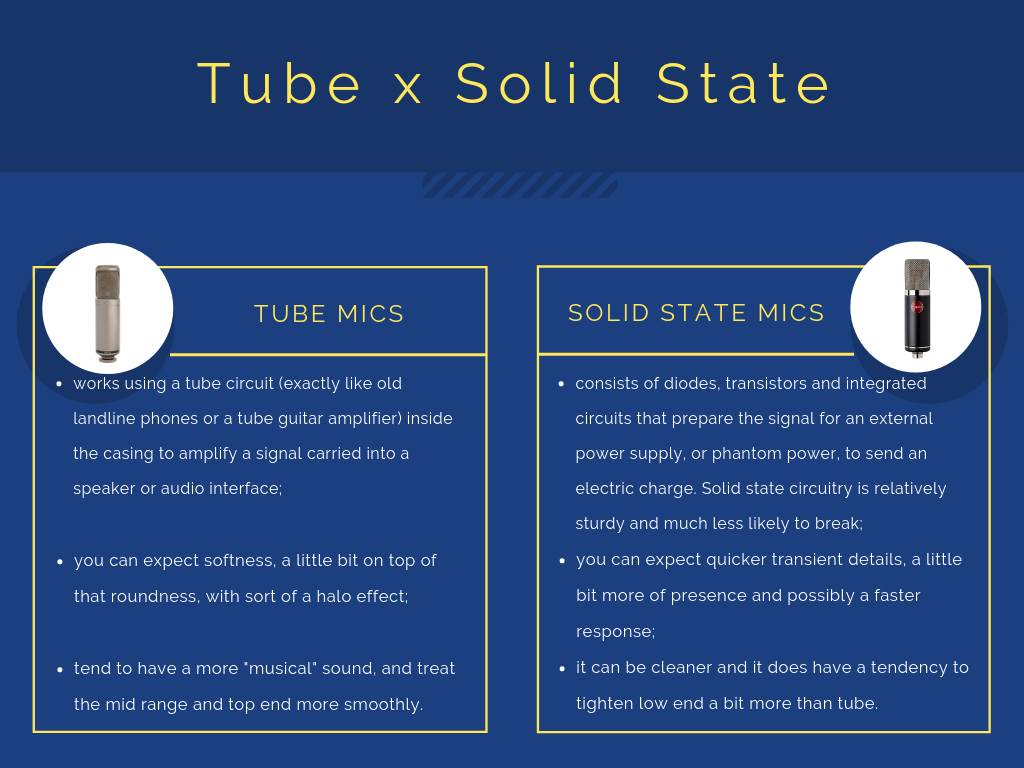 Just let me be clear that the chart above represents a typical scenario. Comparing most tube and solid state mics. It doesn’t mean that you’ll never find a crappy tube mic, or a poor sounding solid state mic. Generally speaking the chart should sum it up.

“… what microphone should I get? A dynamic microphone, a condenser microphone, a ribbon…?” There are plenty of options in the market, and if you’re working on setting up a home studio you probably came across that major wondering. Well… the good news is that there isn’t a wrong answer for that (unless you pick a really terrible mic). The bad news is that there isn’t a correct answer either. It all depends and comes down (mostly) to what kind of recordings your planning to do and what kind of sound you’re trying to pull out. Pretty simple, right?

In conclusion, is best not to get “racial” with this sort of things and analyze the gear. It’s not just about the microphone quality itself, it’s about all the equipment you’re planning to use and which mic should fit better in the mix. There are plenty of amazing solid state mics out there, and there is plenty of crap tube mics as well. Best not over think it too much. Therefore, my suggestion is always to keep an open mind. Try them out (if possible) and just go for sounds which you prefer.