What is frequency in audio theory? Here's our simple guide : Blog - Magroove for Artists

What is frequency in audio theory? Here’s our simple guide

The more you understand audio theory, the simpler it will be to work and the better your productions will be. And not that it’s impossible to learn in practice. You can even set up your home studio and find out what each thing means by trial and error. But your chance of success increases dramatically when you know exactly what each thing means. And that’s exactly why today we’ll be seeing what is frequency, a subject that can be very confusing, but which is part of our daily life. Come with us to understand what it is and its applications. With this, we will be able to undo any mistake. After that, we will see some practical examples in instruments, with their respective graphs, for comparison.

What is frequency in a few words

Understanding what sound is

Stand near a lake or pool and throw a stone into the water. As soon as it touches the mantle, you’ll see waves forming in circles. They will dissipate from the point of origin, losing strength until extinction. From this analogy we can draw the concepts of sound, attenuation and frequency. First of all, notice how it was necessary to disturb the primary state of the water to produce the waves. A stone took the place of an agent here. It disturbed the conventional calm of that surface. That’s why, before, we said that every sound is a disturbance. Without the disturbance, there would be no movement. And, as can be concluded, without movement there is no sound.

Of course we need to treat the medium as an important factor. After all, without it, there would be no way the vibrations could reach the ears. It would be like trying to send a message on a cell phone without a data network. Therefore, in space, sound does not propagate: it is vacuum. Among the main means, we have the gas (more conventional), liquid and solid. In the lake, it is water. With sound, normally the air. Liquids also propagate sound waves – just think of the whales’ sonar. But even hard surfaces do. This is why we isolate our recording studios, so that a bell or dog bark doesn’t spoil the work.

On attenuation, we can also learn from the rock example. The waves, caused by the impact, do not remain active forever. They eventually become null.  The cause of the phenomenon is friction, which takes away its force until it no longer exists.  And finally, to clarify frequency, imagine that we calculate how many waves the stone created in the first second.  If it was a single one, it will have a wave in that second.  Had you released two stones in one second, it would have formed two waves. 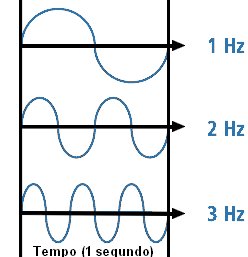 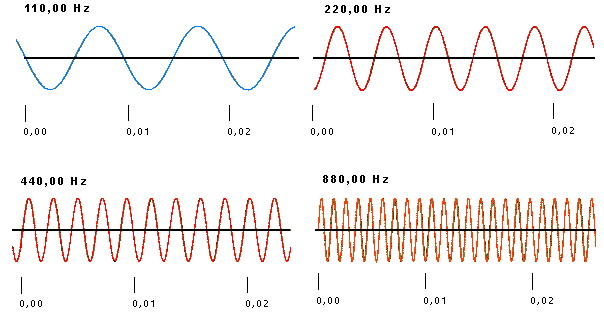 How many times a year do you go to the doctor?  One?  Two?  Twenty?  Knowing the total amount, and having a period of comparison, we can learn the frequency. Frequency, in this sense, refers to the number of repetitions in a period of 365 days.

When it comes to sound, the fundamental idea is basically the same.  However, our period instead of 365 days is 1 second.  The sound effect resulting from a wave with more cycles in 1 second is the increase in tone.  The more cycles in one second, the more acute the resulting sound is.  On the other hand, the smaller the number of repetitions, the lower the frequency and the more bass the sound. 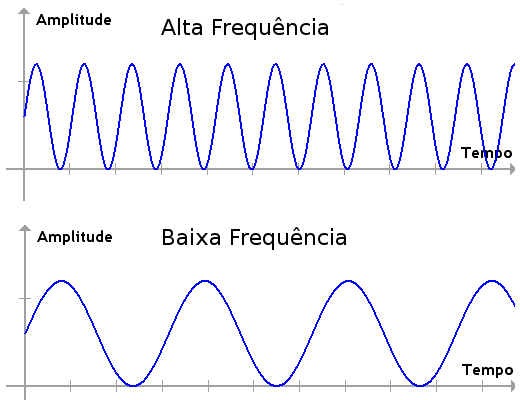 Whenever you hear about high or low frequency, remember: we are talking about a lot of repetitions. And this is represented using Hertz (Hz), which is nothing more than an abbreviation for “number of cycles in one second”. Hertz is the standard unit of measure for frequency.

Important: Do not confuse frequency with sound pressure intensity (the volume). In this case, we refer to the distance between the peaks and the depressions, regardless of the number of cycles per second. Unlike the frequency, here we use decibel, more specifically the dBSPL.

Common examples of frequency in the musical universe

To understand the theory, it is always worth visiting what is common in our lives. Let’s see, thus, some examples of instrumental sounds and their respective frequencies:

And remember: we are not talking about the intensity of the sound produced, but how low or high it is. Whether or not you amplify the instruments, the frequency will remain the same. Only if we make the sound more bass or treble will the frequency change.

The frequency of each string of a guitar

Next, let’s see the frequency of each of the strings on a guitar. Check it out:

The number after the refers to the octaves of the piano. It is easy to find on the internet a list of octaves and their numbers. Just be careful that there are two notations! In American, E4 is the E3 of Europe.

When an instrument plays, we have a subjective perception. With it, we judge and classify whether high or low. However, that sound contains other distinct frequencies, the harmonics. The relationship between the fundamental frequency (which we identify as the note that the instrument is playing) and the others within the sound package is called the harmonic series. It happens that, applying the understanding of frequency in the musical production, other points of importance arise. And it is crucial to take them into consideration, if we intend to mix with quality. Knowing the fundamental frequency of an instrument, we know how much we can cut in the mix. By doing so, we have the security to suppress treble or bass harmonics that are causing conflict with other tracks.

In conclusion, check out a table containing the fundamental frequency of each instrument and its harmonics. Recognizing the space occupied by each instrument, you will be able to balance the various tracks. This will allow greater freedom, with quality, in your production: 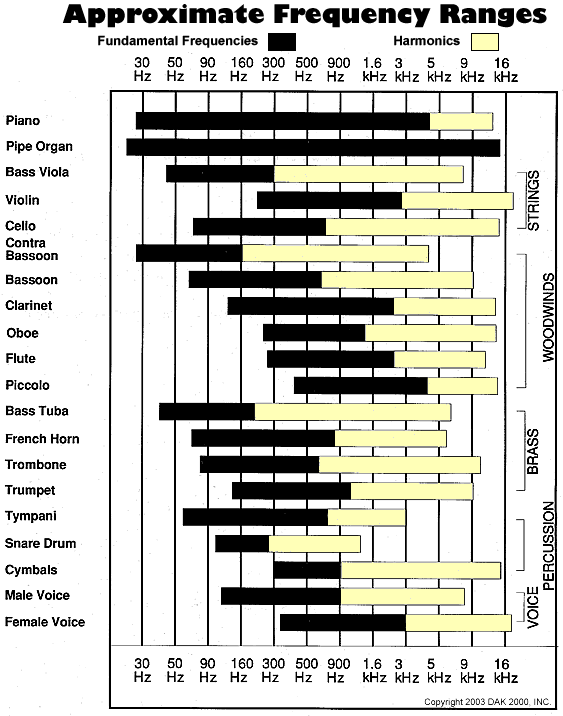