If we could rank the most famous home recording studio myths, this topic would almost certainly be among the first places. In summary, balanced cables are used to connect devices while avoiding interference noises induced on the cable. This is especially important when connecting long distances. The greater the length, the more significant is the noise induced by the interference. In some cases, the noise may reach volumes too great to be ignored and may end up compromising the signal if not prevented. To understand all this, in this article we covered the fundamentals around the concept of balanced systems and all the theory behind how it works and how it prevents noise.

In summary, a balanced cable consists of:

And that’s it! The magic of balance happens because of the equipments before and after the cable. The cable, well. it’s just a cable!

What are balanced cables?

In short, it is a cable capable of carrying a balanced signal. To further explain balanced cables, first we must make it clear that the cable is not responsible for balancing a signal, it is a mere conductor that carries a balanced signal from one device to the other. In other words, balanced signals are created before the insertion of the cable.

Balance is a property of the system – the cable by itself doesn’t produce a balanced signal neither turns the signal into one. This leads us to the first big conclusion about balanced cables:

The prerequisites a cable must have to carry a balanced signal (and thus be considered a balanced cable) are:

What is a balanced signal?

A balanced signal is a signal created in the output of a device, by either an electronics circuit called balancer circuit or by a transformer connected in a certain way. In essence, they both do the same: duplicate the original signal and invert the phase of the copy. This pair of signals, going out of the device and travelling through the balanced cable is our balanced signal.

So when we talk about a balanced signal, we are in fact talking about a pair of identical signals, but one of them has its phase inverted. 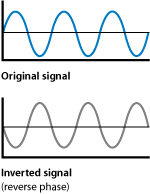 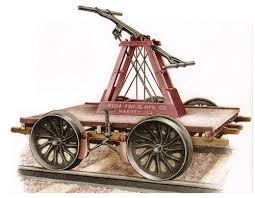 If you don’t pump the bars of a manual rail car, it won’t move. There’s no “turning it on” or “leaving it open” as there is with the fan or sink. It’s the pumping of the bars that makes it move. Also, swinging the bars once and leaving them in their most upper or lower positions doesn’t result in the car’s constant movement. It may even move a little while swinging, but it will soon stop (as opposed to the fan or sink, that turning the valve all the way open or choosing the maximum speed will keep their constant stream).

The same happens with sound. If the air molecules keep on moving on the same direction, there’s no sound. Just like the railroad handcart’s bar need to be one moment up and the other down for it to move, we also need that constant air oscillation for sound to happen. And that back and forth of sound waves, that one moment is compressing and the other releasing, is what we call phase.

What is a balanced cable for?

Nowadays, balanced cables are extensively used due to the standardisation of balanced inputs and outputs in almost any professional and semi-professional audio device. This usually is an over-cautious approach, as most of these equipments are used either on a home recording studio or a small live setup and would do pretty fine without any balanced connections at all.

Balanced systems really shine where there’s a need for signals to travel greater distances, generally over 6 meters (around 20 feet). In those cases, the advantages of a balanced setup is quite sensible. In fact, depending on the ambient and its electromagnetic interference, its absence could lead to very high noise floor which may result in difficulties to use peripherals (especially dynamic ones, such as compressors) or even useless recordings.

And the tough one: How do balanced cables work, anyway?

Try pushing a door while someone is also pushing from the other side. It won’t move, right? This happens because you are both applying equal forces in opposite directions, causing them to nullify.

The same can happen to phase. If both signals (people) have the same volume (force) but with inverted phases (directions), they cancel each other and there’s no sound.

Remember that the phase of one of the signals carried in a balanced cable is inverted? Summing these signals would result in the total cancelling of signal, since they are identical, since “they apply the same force in opposite directions”. For this not to happen, we must first invert back the phase of the copy. This process happens in the input of the device we’re connecting to, and only after this happens the signal is summed.

The magic of the balanced signal happens right there. All preparations (such as the balanced output of the previous device and the use of the balanced cable) culminate to this one little moment. When the inverted phase signal is re-inverted, it’s not only the signal that inverts, but also all the noise picked along the way by the cable.

So, Are balanced cables better then regular cables?

Not necessarily! It depends on your application. If you’re buying a balanced cable to connect an unbalanced device (e.g. guitars, basses, vintage gear), you’re just wasting money. You’re not even having “a little improvement” – it’s literally making no difference at all! That extra wire from the balanced cable is not being used, period. If you don’t have devices capable of generating and receiving balanced signals, there will be no benefits whatsoever. Know your gear, know your applications.

Now, given a situation where interference because of long cables might be an issue, a balanced cable (connected to balanced enable gear) will travel long distances without picking up noise, whereas the unbalanced won’t.

Most devices accept both types, though. So buying balanced cables leaves you with a cable that works for both balanced and unbalanced situations. The best is to check your device’s manual and find out if you have balanced outputs and inputs.

However, it’s important to remember that balanced cables are more elaborate gear when compared with their unbalanced counterpart. That makes them more expensive by default, which may lead to unnecessary purchases. So for example, a musician buying balanced cables for his guitar would be spending money on an useless feature, given the fact that it brings him no benefit at all.