Deezer vs Spotify: The pros and cons of major music streaming services : Blog - Magroove for Artists

Deezer vs Spotify: The pros and cons of major music streaming services

Digital Service Providers (DSPs) – or music streaming services – are the means by which people stream and download music that artists have uploaded. As physical forms of music such as CDs are becoming uncommon, DSPs tend to grow more and more. The various options available make it essential to compare them – Deezer vs Spotify vs Apple Music and so on — and learn is more beneficial to you as a listener and/or artist.

It’s important to note that each service has its ups and downs. There is no such thing as a perfect service; some of them may be better for the listener, for example, and some may bring more advantages for the artist. Each person has their preferences on how they choose to listen to music.

Music artists earn money when they put their music on streaming services because of streaming royalties. To learn more about what exactly are royalties, read our blog post here.

The global music streaming market is estimated to be worth almost 30 million USD, according to Acumen Research and Consulting. Paid subscriptions have almost completely made CDs, Vinyls and MP3s obsolete. The same study also predicted that this market will be worth 100 million by 2030. DSPs are a crucial part of an artist´s revenue influx, and it´s essential to know more about them. To understand a little bit more about Spotify, Deezer, Tidal, Apple Music and other services, make sure to keep on reading.

As we all know, music used to be distributed mainly physically until a couple of decades ago. From the 2000s on, the phenomenon of music streaming has gained momentum and replaced Vinyls, CDs, MP3s, and so forth.

Digital inclusion of music first gained force with the launch of the iPod, in 2001. Listeners had to buy each individual album or single in order to download the music they wanted to listen to.

By the mid 2000s, Spotify and Pandora launched. Instead of the release purchase model, a subscription fee was paid monthly and listeners could access all the music on the platform. These platforms were first shunned for paying the artists per stream (a smaller value than per download). However, listeners soon realized that this was cheaper and more practical, and the music industry and artists had to adapt to this reality.

The artists’ payments depend on whether listeners have a free account or subscribe monthly to the streaming service. Free users´ revenue is mainly from advertisements on the platform, which premium users don’t have. The revenue generated by paid subscriptions is passed on to artists after the streaming platform has taken its share.

The money made from music streaming has grown every year since its launch. The average growth has been of 43.9% and, in 2020, it generated a revenue of a whopping 18 billion USD.

Spotify is, by far, the most popular music streaming service in the world. As of 2022, over 404 million people use Spotify, 182 million of which are premium users. Its subscriber base has more than doubled since 2017, and the app grows since its release in 2006.

To make a dollar on Spotify, you´ll need to have from 300 to 500 streams. This means that each stream pays 0,003 to 0,005 USD to the artist. Spotify, like other popular services, uses the ”pro-rata” or platform-centric model to determine the payout. Calculating the exact amount a stream is worth can be a little complicated, so we’ll break it down for you:

The platform gathers its different sources of revenue, like subscription fees and ads, into one pool of money. From that amount, Spotify collects 30% of the revenue for itself. The other 70% goes to the artists, proportionally to how many streams they had. The average payout rate is 70% of their revenue multiplied by the artist´s streams and the share of rights divided by the total amount of streams on the platform. 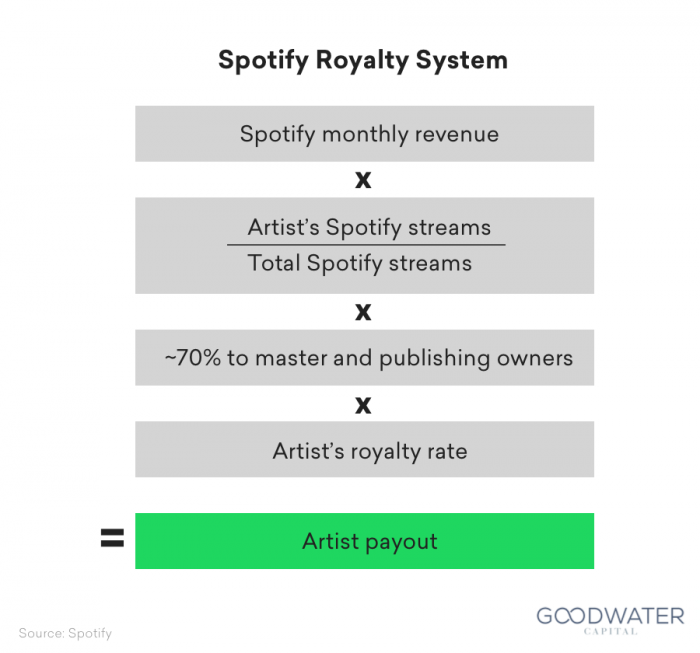 The platform updates its earnings and statistics monthly. However, money made from royalties is only deposited approximately once every three months. During this period, Spotify checks if the streams are not fraud and carries out other operations.

As for listener benefits, Spotify has many. It first grew in popularity because of its easy-to-use app and availability on various platforms. With a wide variety of artists and a vibrant community, Spotify also has personalized playlists and the famous Spotify Wrapped at the end of the year.

Apple transformed the music industry with the iPod, but its delay to step into the streaming scene left its mark. When Apple Music launched, Spotify, its key competitor, was already tens of millions of users ahead. In 2021, Apple Music reported having approximately 88 million users.

The platform pays significantly more than Spotify and still offers a variety of musicians and listener-friendly features such as personalized playlists. Apple Music is available in 167 counties and other features include editorially-curated playlists and Spatial Audio with Dolby Atmos.

The brand claims updates and new data take up to 48 hours to be displayed on the Apple Music For Artists page. Realistically, streaming revenue updates can take about a month to be updated and a little longer for them to be available for withdrawal.

While Deezer may seem small compared to Spotify and Apple Music, its about 16 million users vouch for this service. What sets it apart from the others is the emphasis put on audio quality.

If you´re a musician who wishes for their music to be listened to in High Fidelity audio (HiFi), it´s worth a shot to promote your releases in platforms such as Deezer and Tidal. Deezer plays losslessly files and reduces distortion to assure a better experience. It also pays an average of 0.0064 USD per stream and is available in 188 countries. Other features include a personalized playlist service and a Songcatcher to detect songs.

Distributors have claimed that Deezer takes a while before streaming and royalty revenue is available for withdrawal. It can take up to six months for this platform to carry out a payout.

Tidal first became a worldwide player for having Jay-Z as a majority stakeholder. Consequently, many artists associated with him released first exclusively on Tidal, with albums such as Beyoncé´s Lemonade and Kanye West´s The Life of Pablo. In 2021, the rapper sold his share for almost 300 million USD – the service as a whole is worth a lot more.

Like Deezer, Tidal is a service more appropriate for audiophiles. It claims to offer a superior listening experience with HiFi (1,411 kbps) and HiFi Plus (9,216 kbps). Besides the Master-quality audio, it also has curated playlists, exclusive albums, and video content.

In the Top Tier Plus, listeners have the option to offer payouts directly to their favorite artists, something many die-hard fans appreciate. Video content also includes exclusive concert streamings.

In Tidal’s top tier plus (most expensive streaming plan), you have the option to offer payouts for your favorite artists, something many die-hard fans appreciate. Video content also includes concert streamings. The payout model is also user-centric, aiming to provide payout based on the user listening experience.

Tidal pays more than almost any other streaming service, despite being cheaper than some other services. With approximately 0.0125 USD per stream, it is outperformed only by Napster (about 0.019 USD per stream).

Artists that register with Tidal directly (invite-only) can expect royalty payments up to a week after the month´s end, if the 5O USD threshold is met.

Amazon is no stranger to the streaming market, having its own TVstreaming service, Amazon Prime, and now tries to grow with music as well. In 2020, it was reported that Amazon Music had over 55 million subscribers worldwide.

There is a distinction between the two platforms, Amazon Music Prime and Amazon Music Unlimited. The first comes with an Amazon Prime membership and offers fewer features and about 2 million songs. There is also a separate payout calculation that comes to only 0.00139 USD per stream.

Amazon Music Unlimited has over 50 million songs in its database. Its features include personalized playlists, sync with Amazon´s Alexa (which recognizes voice music requests), and people who own an Amazon Echo device enjoy subscription discounts. They pay about 0.004 USD per stream.

Despite being most common overall streaming platform with over 2 billion users, YouTube´s paid subscription service is not the leading force in the market. Recently, the brand has made more efforts to increase its active member base and has been growing considerably.

YouTube reportedly pays about 0.008 USD per stream, but factors such as on-video ads for music videos streamed through the platform can increase the overall income. Advertisement on the platform should generate from 7 to 10 USD every 1000 impressions for the content creator. However, not every view counts as an impression, as not all views on YouTube videos contain ads.

The platform features a multi-channel payout system, with considerably less money being generated when streams are not made by YouTube Premium or YouTube Music users. 0.00164 USD is given per stream on the Official Artist’s channel and Content ID monetization only cashes out about 0.00087.

To each their own

Music holds a special place in people´s hearts, so it´s understandable that some people take so seriously choosing what music streaming service to rely on.

When making this decision, consider the highs and lows of each platform – its popularity, pay-per-stream rate, and what features they may or may not offer. Each individual can have their own favorite platform, and that´s okay.

As an artist, knowing the basics of every streaming service is crucial to maximize your management strategies. Try to reflect on how the knowledge of the advantages certain services have for artists can apply to your marketing and release campaigns to ensure maximum engagement and visibility!

You may also like
A selection of the best articles on this topic.
Electronic press kit for musicians - 10 ideas to create yours today
October 11, 2022 • 8 min read
YouTube Content ID: A quick guide for music artists
September 27, 2022 • 5 min read
Instagram for musicians - Create a page for your band!
August 29, 2022 • 6 min read