Studio monitors - What is the difference from a regular speaker? : Blog - Magroove for Artists

Studio monitors – What is the difference from a regular speaker?

Those who have just started their endeavors with a home recording studio might make a very wrong assumption.  That is, believing that any soundbox can work in the same way studio monitors do. Though this is a common misconception, it’s far from the truth.  Office sound boxes and domestic appliances handle the frequencies very differently.  With those, there isn’t necessarily a balance between low, mid and high frequencies.  This could come at the cost of the quality of your mixing.  When we talk about good monitoring equipment, we’re describing equipment with one specific goal: it will be as “flat” as possible.  Meaning it won’t favor or smooth out any frequency.  Since the playback is so loyal, you are guaranteed to be listening to the exact material you’re working on.  Herein lies the secret of good mixing.

What are studio monitors for?

How should I choose between studio monitors?

Starting with the size

The first step when choosing between different studio monitors is deciding on the best size.  In very small rooms, using a big studio monitor is a mistake.  In this case, it’s better to pick a monitor with 5-inch to 7-inch speakers.  The same goes for very big rooms.  In those, 10-inch speakers may work best.  The problem with using a big monitor in a tiny room is that the low frequencies get jumbled.  Because of this, you’ll be fooled into erasing out bass sounds. The problem? Your monitor was lying and you took out bass that didn’t need to be taken out, just so the recording would sound better in your room.  When you play it in a balanced room or a headset, the mix will have no bass.  In the opposite case, using a small monitor in a big room will probably cause an excess of bass sounds.

All things considered, a 5-inch or 6-inch monitor should work quite well in a bedroom-sized spaced.

To clarify, “way” refers to each of the studio monitor speakers. The most common types are:

You might believe that the greater the number of ways, the better.  There could even be some truth to that.  Ideally speaking, it’s much better to have a speaker dedicated only to the low frequencies.  After all, the drive will depend on much superior – and more expensive – components to keep the material faithful to the source when shared.  Following this logic, the 3-way studio monitor is a better option.  But even then, dedicated speakers need good components.  Otherwise, it could have a dozen “ways” and the sound will still not be the best.

An important tip: don’t count ways without considering the price.  If you’re short on money, it’s much better to get a good 2-way studio monitor than a bad 3 (or more) way device. In the end, it’s about the sound, not the number of speakers.

As soon as you choose the size and the number of ways, you’ll probably want to pick between passive or active.  Have no doubts – you’ll probably find the passive monitor more tempting during your research.  After all, it’s usually cheaper.  The thing is, the term “passive” refers to the autonomy of the studio monitor.  In other words, it requires an amplifier to go with it.  Meaning you’ll invest twice to use a passive studio monitor – once with the monitor and once again with the amplifier.

The active studio monitor, however, comes with an amplifier built in it.  Just connect it to the interface or table outlet and you’re set.  Some prefer the passive monitor + amplifier combination, though.  Still, the active monitor amplifier does the job quite well.  In the end, it’s up to you.  Just keep in mind that you’ll need an amplifier that doesn’t make the audio too “colorful”.  The Alesis RA100 is a good example of a “flat enough” monitor, but it’s been discontinued.  Realistically speaking, the active ones are the most used in studios. Especially in concise setups and home studios. And you don’t have to worry about dimensioning an amplifier.

Power should never undermine the quality

Going into the more technical aspects of studio monitors, the next thing to consider is power.  To put it simply: the greater the power, the louder the speaker.

One would expect that a greater power would enhance the quality of the sound. However, this isn’t necessarily the case. As such, you should be aware of two points:

Thus, it’s important not to blindly trust the manuals and listen to the studio monitor in action before acquiring it.  It’s worth it to pay visits to shops, studios and to read reviews about it.  But don’t expect to “get experience” from videos.  You’ll obviously not be really listening to that studio monitor.  One other aspect to take into account in this context is the headroom. Also known as “peak headroom”, it pertains to a safe zone for mixing and mastering. During mixing, it’s crucial to keep your tracks under -6dB in your DAW’s meters.  The headroom corresponds to the relation between 0dB and the peak of the recording.  The smaller the relation between them is, the more difficulty you’ll have when mastering.  As a result, there’ll probably be clipping and distortions in your peaks.

What else should I know before looking at some studio monitors?

Great! You already have a bunch of tips to help you choose.  However, before we look at some of the models, let’s go into another practical matter.  As said before, having a good studio monitor isn’t enough. It’s crucial to also know how to place it. There’s one important aspect worth mentioning:

In the exact moment you get your studio monitor, you’ll need to make an equilateral triangle between you – that is, your head – and the left and right monitors.  Each one of them should be pointing to its corresponding ear.  Not above or below.  And, if necessary, tilt the monitors vertically.  This is the proper placement for a stereo setup.

Within the dimensions of an average bedroom, keep yourself at least one meter away from them and apply the same distance between the two monitors.

As promised, let’s now go into some brands of studio monitors worth your money.  You’ll see many market favorites.  But don’t forget: the decision is yours to make! You’ll be the one working with the device and should feel comfortable with it even before the purchase.  Try to experiment.

Before we start, you’ll probably hear a lot about the NS10. Some time ago, these monitors were either loved or hated.  The NS10 became a recurring sight in studios all around the world.  Considered “too rough”, the NS10 was reinterpreted in the HS Series.  With prices ranging from US$ 520 to US$ 1290, it delivers what it sets out to do. It’s possible to find the Yamaha HS studio monitor in 5-inch, 7-inch, and 8-inch models.  Those who loved the NS10 are guaranteed to get a good, faithful sound and the famous “ugly truth”: if it’s bad in the monitor, then it’s really bad. 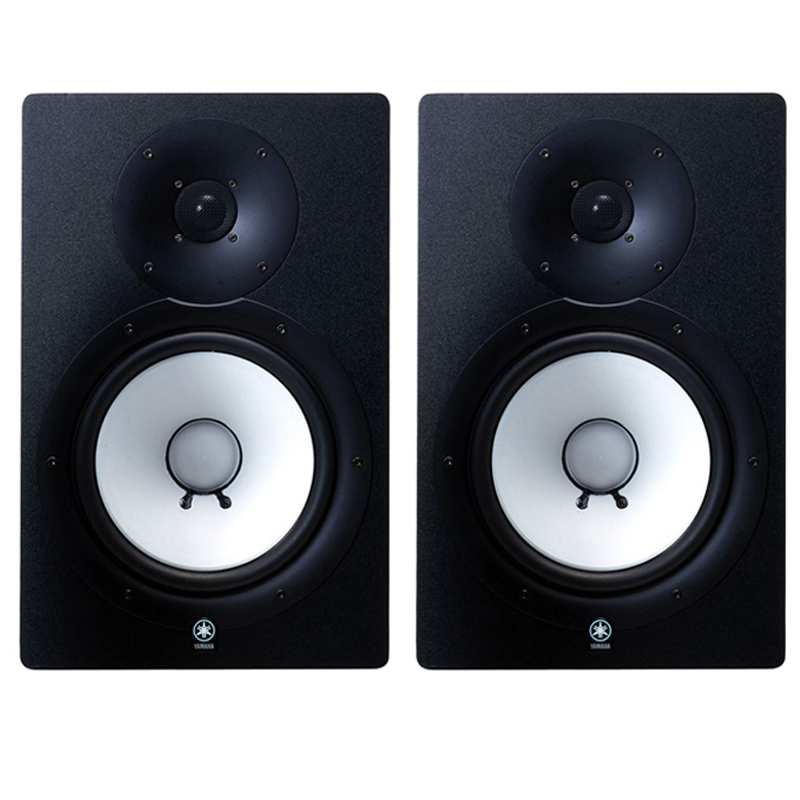 Because it’s so good at portraying bass sounds, it’s used in low-cost heavy metal and electronic music masterings a lot.  The initial price is around US$ 390, drawing attention.  It gets a lot of love because of its varieties in size: 4 to 10 inches.  It’s important, however, to be aware that the enhancement of lower frequencies might deceive you when mixing, depending on the style and size of the home studio. 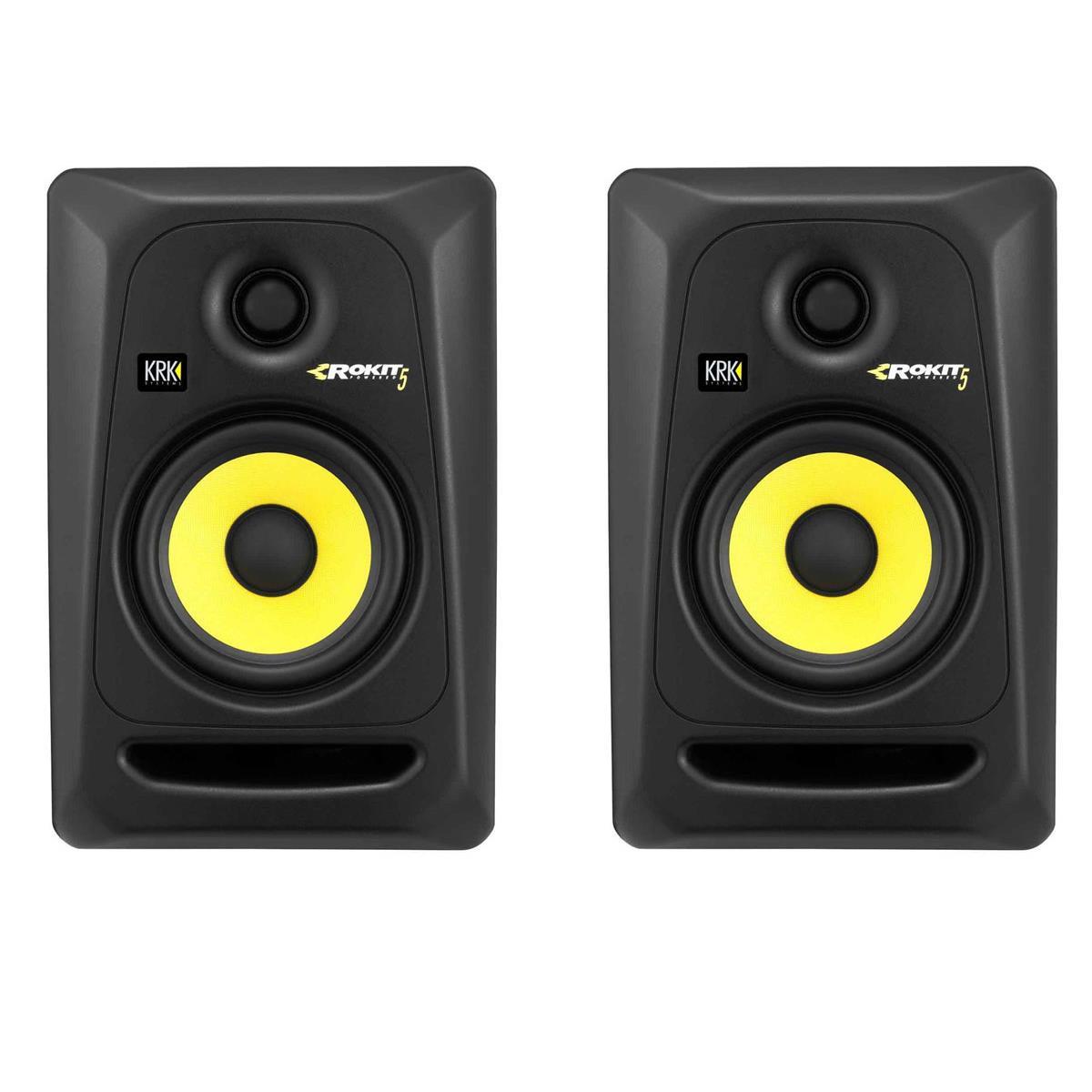 With an attractive initial price, the B20314’s perk is that it works by itself.  Coupled with another device, it’s a favorite for those who intend to reference.

The disadvantage is that there are only 8-inch models of them.  If your room is too small, the bass and treble adjustment in the back can be a lifesaver. 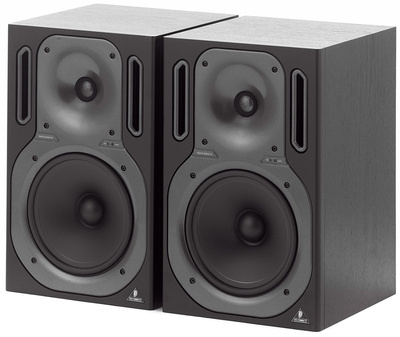 If you’re not financially in a good place right now, don’t despair.  The better your work is, the faster you’ll be able to buy an excellent studio monitor.  If you can’t do so right now, here’s an important tip:

Is the amount of money you have not enough to buy the cheapest of monitors? Try getting the best studio headphones you can get.  One of these headsets will make the use of acoustic treatment home studio dispensable and it will be useful in the future, too, when you want to compare results with the studio monitor.  The most important thing is to invest in your dream.