Dynamic Microphone : What is it? When to use one? : Blog - Magroove for Artists

Dynamic Microphone : What is it? When to use one?

One thing is for sure: basically any home recording studio has at least one of them… Or maybe not if it is an EDM studio! The dynamic microphone (just like any other kind of microphone) is a transducer. It means that they are capable of converting a type of energy into another. In this case, the vibration of the air (mechanical energy) into an audio signal, that will be sent through the cable (electrical energy). If you want to know more about it and find out if is that what you need, read it up!

As being not very sensitive, dynamic microphones require more energy to vibrate their diaphragm. This makes them a real good pick for sounds with high pressure levels. Recording of snare drums and guitar amps are good examples of perfect uses for dynamic microphones. They are also largely used by singers in live concerts, since the volume at stage is too high.

Also, being less sensitive, it might need more gain of the pre-amp to reach a good level of sound recording.

The Basics about the dynamic microphone

The most important part of the dynamic microphones is their diaphragm. A diaphragm is nothing more than a light and thin film which is connected to a coil. in the case of the microphone it is normally a spiral made of a single copper wire, also very light an thin. This diaphragm vibrates with sound, which on its turn moves the coil. Since it’s a spiral, there’s a hole in its center. In this hole,  there’s a magnet. However, this magnet is fixed to the microphone’s frame, thus it isn’t stuck to the coil and so does not follow the membrane movements when capturing sound. It’s the presence of this permanent magnet next to this moving coil that produces the electrical signal. Each ends of this coil will be connected to the pins of the microphones, and may vary or not if there will be a circuit in its path.

This process is the opposite of what a speaker does. The speaker receives an electrical signal and converts it into sound. Thus, just like the dynamic microphones, they are considered transducers too.

We listed down below some of the most popular dynamic microphones and their most classic applications:

These applications may be found in studios of all categories, from the most simple to the most well-equipped one, what shows us that they aren’t chosen due to the price or the affordability itself, but for the sound they produce.

About the most popular dynamic microphones

Shure SM57: It wouldn’t be far from the truth mention that any home studio in the world has at least one SM57 on their list. Many even prefer the sound of this microphone in different uses, when other kind of microphone normally should be considered as a better option. It’s the loved sweetheart of guitar amps miking and snare drums recording. 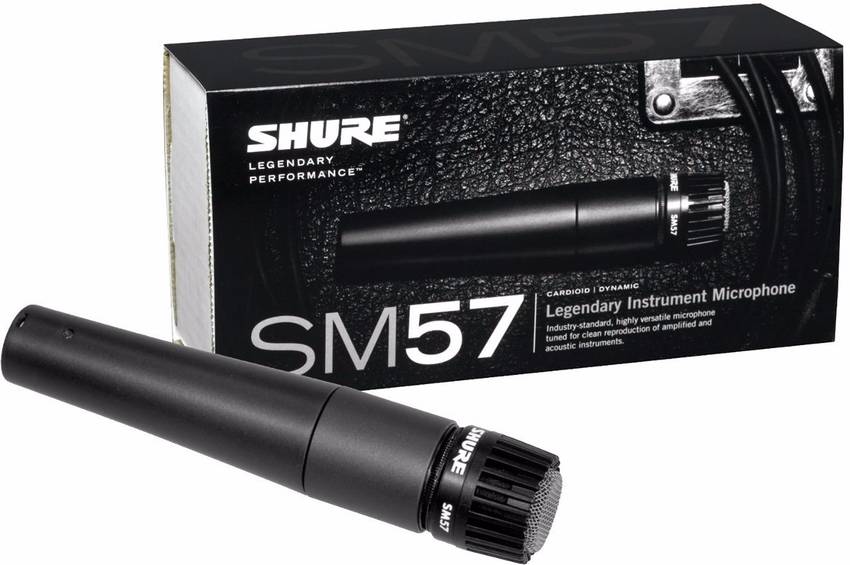 Shure SM57 – One of the most used dynamic microphones in the market.

Sennheiser MD421:  Just like the SM57, it’s very versatile, being used in many instruments. Very used in drums toms. There’s a particularity in this microphone which is to look like a condenser microphone, leading many people to position it standing up. The truth is that it has the capturing axis just like the others mentioned above, in other words, the opposite side of the connector. 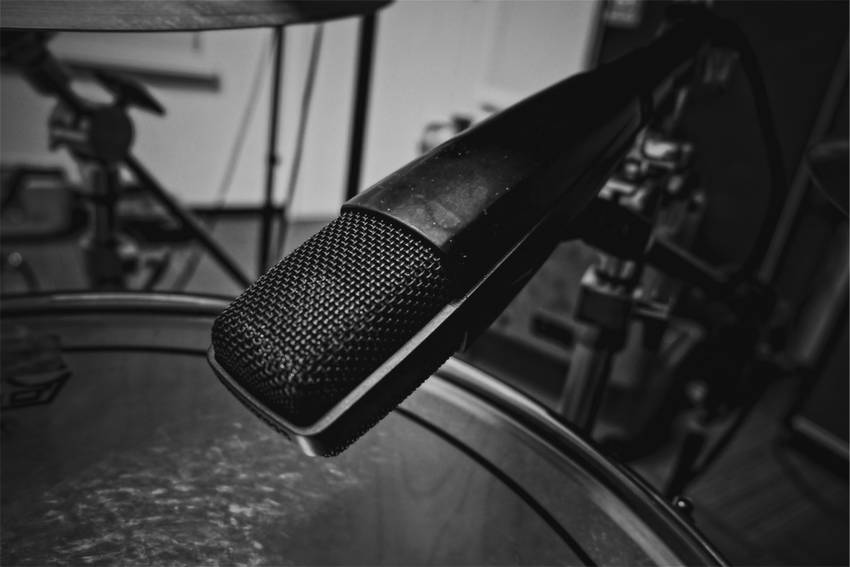 Electrovoice RE-20: An unique model among the dynamics is the RE-20. Its unique construction allows a great reduction of the proximity effect. A good example of proximity effect is when, singing or speaking closer to the microphone, the voice gains more bass and presence, which doesn’t happen when singing away from it. The RE-20 basically does not have this effect, in other words, no matter how close to the microphone, the voice will be with a similar equalization. It makes this a very popular choice for broadcasting and voice recording in general. It’s also a very often choice by some famous vocal lead singers, i.e. Thom Yorke from Radiohead. It’s possible to see him using this model on many of his studio performances. 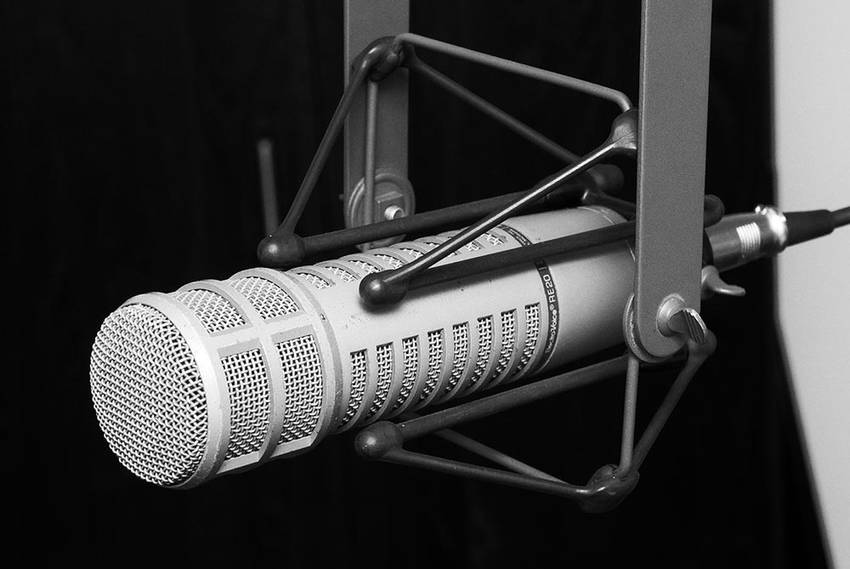 Let’s remember what are the most common polar patterns:

The majority of dynamic microphones are also a cardioid mic, that means it’s a microphone made to capture from one side of the capsule. All that we listed above are examples of Cardioids!

There are a few, also popular, which are Super-cardioids. Specially the Shure Beta57A and Beta58A (old Beta57 and Beta58 versions). They are the preferred for many live vocals, since they are still more directional than the cardioids. On drums capture, they might be useful to isolate some pieces because they capture less then cardioids on the sides, making them useful to prevent from noises if well positioned.

Which capsule sizes are there?

Generally we do not refer to dynamic microphones by the capsule size, although there’s a slight difference in it. Shure SM7 and Electrovoice RE20 auto-declare themselves “large capsule”, but as matter of fact it is not what will make difference in your choice or the sound produced by the microphone. Capsule size is only an useful classification if we’re talking about a condenser microphone. Popularly and by the market view, we do not segregate dynamic mics by the size of the capsule, thus the choice of a dynamic microphone is mostly made by its response curve and polar patterns.

When should I use a dynamic microphone ?

The most classic uses for dynamic microphones are when…

The cardioid pattern and the low sensibility makes it ideal for concerts, as a result, it allows to use a much higher gain before feedback than with condenser microphones.

At the same time, they are extremely resistant and aren’t damaged if they receive phantom power, both weaknesses found in a ribbon microphone. Due to their frequency response, they are good for sounds with emphasis on medium frequencies, with some exceptions for low sounds. Its slow response time makes it a good pick when it comes to sounds with less emphasis on transients and more constant in overall.

When not to use a dynamic microphone

As it does not record transients and high frequencies very well, then this makes it not a popular choice for recording sounds which do need higher definition and detail. Furthermore, it’s not very sensitive, so it’s not practical to record subtle sounds either. For the same reason it needs more gain and ends up with increased noises and interference. It depends on the equipment quality, maintenance, and the way the sound is recorded.

Finally, the dynamic microphone is very versatile and has a relatively low cost, becoming quite popular among beginners. It can be used for studio recordings, concerts, broadcasting and presentations. The fact of being resistant makes it a great purchase for whoever needs to transport equipment very often.