Ribbon Microphone - What is it? How to use it? Why would I want one? : Blog - Magroove for Artists

Ribbon Microphone – What is it? How to use it? Why would I want one?

The moment of choosing a microphone to your home recording studio involves two big questions. One of them is the necessity of such device; the other one is the type of sound that can be produced with it. And when we talk about type of sound, the ribbon microphone comes up as one of the most charming and peculiar of it’s kind. Currently, the design of this mic refers to those models used in radio and old recordings, you might have seen in films and photos. But that sound, elegant and soft, continues to sustain its personality. Inside studios it has always been present, even in times of fast evolving technologies. Here we are going to tell you the secrets and details of this classic microphone so you understand why and how to use it the best way possible.

How does the ribbon microphone work

The ribbon microphone came before the dynamic microphone. Its name originates from its main piece: a thin metal ribbon. This ribbon can be aluminum, duraluminum or nanofilm and it’s installed between the two poles of a magnet inside the capsule. The metal ribbon works as a diaphragm and transducer, capturing sonic vibrations and turning that vibration into electrical signal. The tension induced on the ribbon is created by the speed of the air coming from the sound source. That is why it is also called “velocity microphone”.

The sound of the ribbon microphone

One of the most known definitions of the ribbon microphone was given by AEA founder, Wes Dooley. According to Dooley, ribbon microphones “listen like your ears”. The natural way that it captures sound is very transparent in the final audio; while other microphones offer a very accurate sound, capturing nuances that you didn’t even heard or might not even want. The ribbon microphone is very linear, therefore, very honest. The low frequencies have greater impact on metal ribbons, producing peals of resonance. On the other hand, the ribbon accepts well and even reduces slightly high frequencies, generating a plain response to that type of wave. That is why the great sound, warm, gracious and also dark or dim for some people.

Tip: the incompatibility between impedance and the electrical circuit of this kind of microphone, can result in an apparently muffled, low volume sound. To correct that problem you can add a pre-amp (and an equalizer if you wish to) to your recording. When well used, those resources bring brightness and emphasize high frequencies, enriching the captured sound.

All the subtle movements felt by the ribbon are transformed into small voltages, that might sound almost imperceptible when there is incompatibility between impedance and output. With a pre amp and an EQ you will notice that the recording registered precisely and in detail the sonic frequencies, and all that “darkness” was only a matter of electric current.

Directional patterns of the ribbon microphone

The ribbon microphone is bidirectional, which means it has a figure 8 polar pattern. That characteristic made this the most preferable model in old radio broadcast, like talk-shows, for example. That is because it captures sound from both ends, front and back – any sound coming from a 90 degree position is ignored.

Today you can find, in smaller scales, ribbon microphones with different polar patterns than a cardioid microphone, hypercardioid or an omnidirectional microphone.

The phantom power sends electric current to power condenser microphones, direct boxes and other equipment, through balanced cables. Since the traditional ribbon microphones are equipped with an internal transformer – the T-power –  it doesn’t need phantom power. So be very careful when using this resource, because many ribbon microphones can be damaged by it. As a rule of thumb, don’t ever turn Phantom Power on before checking carefully if your ribbon microphone supports it.

Currently there are some models of ribbon microphones that need phantom power – not for the transducer ribbon, however, but to other internal components. Such as Royer’s R-122 MKII, AEA’s A 840 and Shure’s KSM 313.

Like we said before, this microphone satisfies beyond its own demand due to the authenticity of the sound it captures. So, you can use a ribbon microphone in your home studio for the same type of recording you would use a different kind of microphone. What differs ribbon from other in this case is the intention.

Increases low and mid frequencies and softens unwanted distortion of amplifiers, getting a rich and full bodied sound. The KSM313 model, made by Shure, it’s used live by guitarist Slash, from Guns N’ Roses. In studio, he uses an R-121 with a Shure SM57. 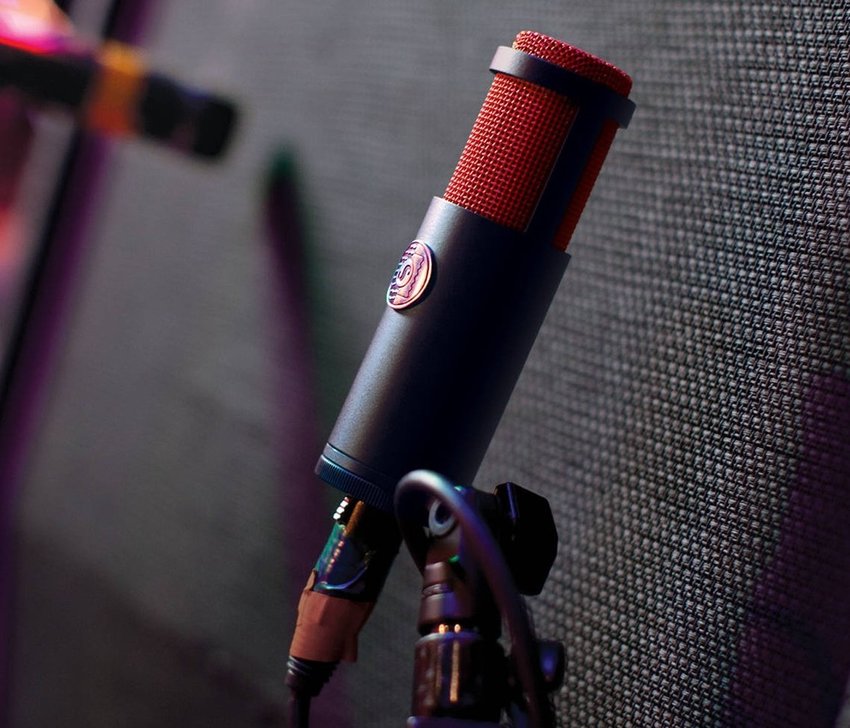 The KSM313 used by guitarist Slash in live shows.

Positioning some musicians in front and others behind the ribbon microphone is the ideal way to capture ambience (room sound) for a string quartet or even a bigger ensemble, in big or small spaces.

With horns and brass

When well positioned, the ribbon microphone won’t capture the sound of mouth pieces, buttons and keys. It doesn’t saturate high notes; in fact is the opposite: it has high dynamic range, enriching the performance.

With drums and percussion

Works well as overheads, with only one extra bass drum microphone, making a very minimalistic kit that captures ambience and room very naturally. If you are going to use a ribbon microphone on the bass drum a good suggestion is a Royer R-121 placed in a 45 degree angle from the front head.

Taking in consideration that this is one of the most musical microphones ever built, the RCA R44BX – replicated in the AEA R44, has been used to record Frank Sinatra and Billie Holiday, and has inspired the creation of many other models. If you are looking for a full bodied sound that captures as much feeling as it can, the ribbon microphone is the way to go. It minimizes wheezing sounds, captures with precision proximity, low frequency voices and low volume voices as well, softens high frequency, making easier to equalize it later on, with no detriment.

One of the most known uses of ribbon microphones is stereo recording, following the Blumlein pair technique. Created by electronic engineer Alan Blumlein, the method consists in two bidirectional microphones, positioned 90 degrees from each other. 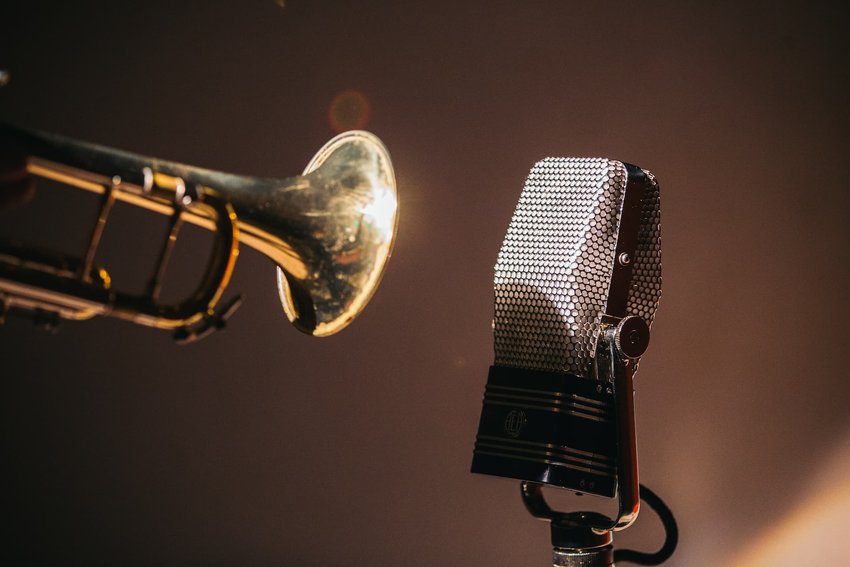 Difference from other microphones

The main difference between ribbon microphones and all the others is the transducer mechanism, that influences it use, its construction and the characteristics of each model.

In the dynamic microphone, a moving coil is connected to a diaphragm. This coil moves when pressured by air coming from the sound source. The magnetic field transforms acoustic signal in electrical signal when it captures movement.

The condenser microphone has a thin metal plate on the diaphragm. It is powered by energy – phantom power or batteries, what makes its range the most sensitive and wide.

The ribbon microphone has no coil or diaphragm but instead it has a thin metal ribbon. The piece is placed vertically between two poles of a magnet, creating a magnetic field. When the sound source produces pressure, the ribbon moves inducing electric impulse due to the magnetic field.

How to take care of a ribbon microphone

Even if more recent models present robust structures and bigger outside protection, the metal ribbon, the main part of this microphone, is extremely fragile. You can permanently damage the membrane by any falling, hitting or strong impact.

In comparison, the metal ribbon of a Royer has 0,004 mm; whereas a piece of human hair has 0,1 mm. So you can understand how careful you will have to be handling your ribbon microphone. Temperature, position, contact, wind and almost anything around it can also damage the microphone.

Instruction manuals of most ribbon microphones recommend taking out of its case only when using it and that it always be kept in the vertical position, otherwise the ribbon can stretch on it own and damage the microphone too. Always be kept in places free of excessive heat or light and dust. All those tips may increase the lifespan of your device.

If you clicked on the above link above the legendary RCA R44BX, you might have noticed the unfriendly prices of a professional microphone like that. Thinking in more realistic options for people starting their own home studios, we selected the most known models in the market today:

If you are looking for aesthetic “signature” in the sound of your home studio. the ribbon microphone is an option that brings originality to any recording. And the best part is: it does it naturally.